The guitar-less rock n roll band The Great SOCIO are this week’s featured band! Our listeners know the band well. If you have any part in the Philadelphia music scene then you know this band as well. They are promotional machines and they’ve made certainly made their mark on the scene.

I don’t know if it’s their unique sound, their musicianship, or their powerful stage presence but The Great SOCIO are getting a lot of  well-deserved attention. They’ve been non-stop touring since their first release, Free Tongues, in 2011. We had the pleasure of meeting them at last year’s Jam at the Dam and have seen them many times since. 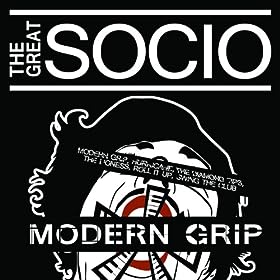 After a successful Kickstarter campaign (raising $8,294) The Great SOCIO are ready to release Modern Grip. This Saturday, April 27th, at the TLA join us as we celebrate the release! The Strange Heat, La Capitana, Devise & Propect Hills will also be performing.

We were fortunate enough to get an advanced copy of the new album. so tune in all week to hear Modern Grip in heavy rotation! We’ll also play a track at the beginning of every Gashouse Live (weekdays 6pm ET) this week.